Organising a movie night party for your child’s birthday? Here’s a list of three suggestions to give you some food for thought; including suggestions for party bags, after all here at All About Party Bags, we’re all about the party bags.

1) Star Wars
The Star Wars franchise is a great choice for movie night party ideas.  The films are enjoyed by people of a wide range of different ages, ranging from young children all the way to adults, so they’re a great way for parents and children to bond.

With regards to a Star Wars themed birthday party, there are lots of fun games and activities that you can do. Firstly, there’s fancy dress because in addition to the awesome films there are many other difference sources for inspiration including The Clone Wars cartoons, the Rebels cartoon, the spin offs, the books, and the comic books. Additionally, if you’re looking for a fun party game, with just a little bit of creativity, you can transform typical part activities into Star Wars themed party games, for example you could make a Death Star piñata. A piñata is typically made from paper mache and contains candy or toys (see our party bag fillers section for awesome toys). So with just a little bit of time and creativity, you could make a Death Star piñata, then decorate a piñata stick to look like a lightsaber and take turns attacking the piñata until the treats are released.

With a Star Wars themed party, it’s easy to get carried away with decorations, party games and activities, but don’t forget about party bags. In our collection of over 500 pre-filled readymade party bags to choose from, there are lots of sci-fi themed party bags including space, aliens, and monster styles.

2) Disney
There are lots of Disney films to choose from when organising a Disney themed birthday party for your little one, you could choose a Disney princesses theme and decorate different areas of the party venue with pictures of a specific princess and use party decorations in a colour associated with that colour. For example, blue for Cinderella, yellow for Belle, and Pink for Sleeping Beauty.

Disney is a great idea for a film party because due to the popularity of Disney films, there are lots of readymade themed party foods to choose from, including themed birthday cakes. However, if you’re up to the challenge of making your own cake for the birthday party you can find lots of delicious cake recipes from the official Disney Family website. For example, a Hidden Mickey Mouse cake, a Lion King Cupcake Cake, and much more.

With regards to the choices for party bags, you could decide to make your own and browse through our selection of princesses & fairies collection of party bag fillers, however if you would like to save time and purchase readymade party bags, we recommend products such as the Princess Sticker Party Bag or the Filled Pink Princess Drawstring Party Bag. 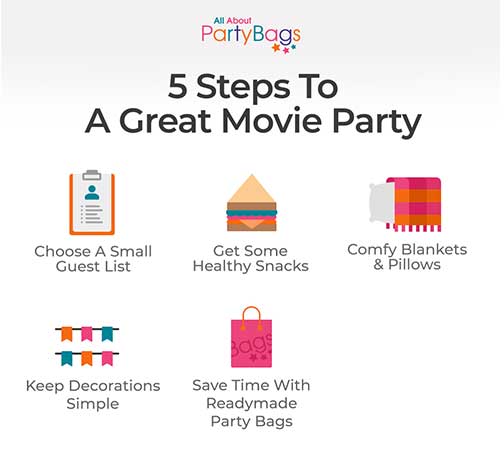 3) Superheroes
Another great option for movie night parties for children are comic book superheroes. In the past decade we have been spoiled for choice with regards to superhero movies, with films such as the Avengers Series from Avengers Assemble in 2012 to Avengers Endgame in 2019. However, for those interested in a trip to the cinema as a part of the birthday party celebrations, 2020 is set to be a very exciting year in the world of comic book movies. This month (February) sees the release of Birds of Prey starring lots of awesome female characters from the DC comic book universe including Harley Quinn, Huntress, and Black Canary. However, these are not the only powerful ladies we can see on screen this year, as later on we will be able to enjoy heroines like Gal Gadot as Wonder Woman in Wonder Woman 1984 and Scarlett Johansson as Black Window in Black Widow. 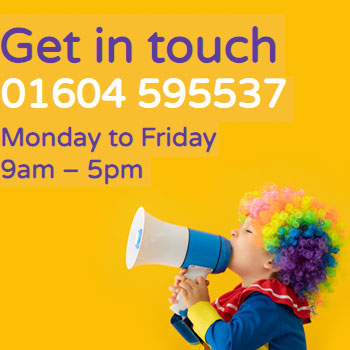 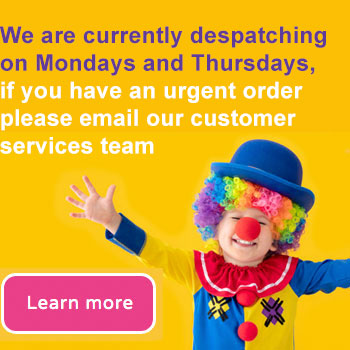 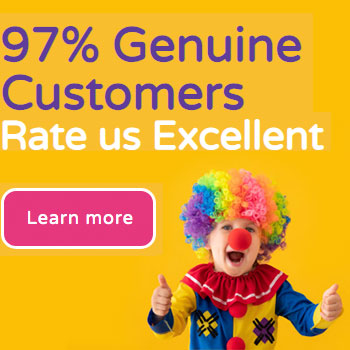 For exclusive offers
& the latest news